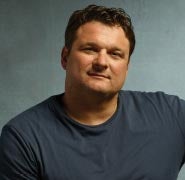 MSG John E. Masson committed 11 years of his life to military service. His injuries exemplify his dedication better than his awards and distinctions do.

While stationed in Kandahar Province, Afghanistan, John stepped on an improvised explosive device and lost his legs and left arm. Immediately after the explosion, he aided his Medical Sergeant and teammates in treating his own wounds – actions that clearly saved his life.

John received the Purple Heart for his injuries and a Bronze Star for his actions in combat. Masson promises he will walk again. “It’s something I wish could be taped” Masson says. “The day it happens we could show it right back to the enemy – that you didn’t do anything to this guy.”