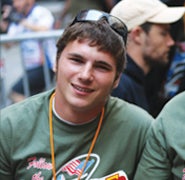 In September 2011, the residents of Ararat, Virginia greeted JB Kerns with waving flags on his homecoming as a motorcycle motorcade escorted him home. The event was in tribute to JB’s service as a combat engineer in the US Marine Corps.

JB’s third tour of duty in Afghanistan took a catastrophic turn when he lost three of his limbs and sustained severe injuries from an improvised explosive device. JB has undergone extensive surgeries and strenuous physical and occupational therapy.

JB’s smart home was dedicated in September 2014. He played an integral part in the design of his smart home, especially the unique wood detailing elements within. JB’s passion for automobiles; working on cars, mudding in his track, racing his Mustang and being an avid NASCAR fan keeps a smile on his face.