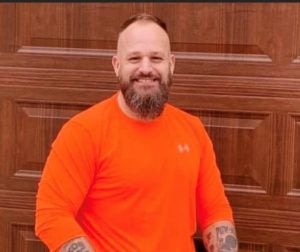 US Army Specialist Jason Wheeler joined the Navy in 1991 and served as a Firefighter on the USS John F Kennedy aircraft carrier during the Gulf War.

In 1993, he was honorably discharged, but when America was attacked on September 11, 2001, Wheeler felt called to re-enlist in the US Army.

Wheeler was assigned to the 1st Battalion of the 509th Airborne Infantry Recon, Team 2.  In 2002, during a training exercise simulating war, and during very unfavorable weather conditions, Wheeler jumped out of a Black Hawk helicopter at 1,500 ft. At about 250 ft from the ground, he experienced a parachute malfunction. He was unable to cut away the chute that was wrapped around him and at 50 ft. from the ground, he had no support from his equipment and hit the ground at full force.

The impact of his fall left him with numerous injuries including rod damage to both eyes, leaving him legally blind, a traumatic brain injury, PTSD, and due to the extreme injuries to both legs, in 2015, Wheeler had a bilateral above-knee amputation.

Following his amputation, he started doing yoga, meditation and going to the gym to manage his pain and have a clear focus. He enjoys adaptive sports, throws in Highland Games, Brazilian Jiu Jitsu, and participates in 5ks. He is also a Master Mason and a Shriner and looks for any opportunity to serve others.

The Tunnel to Towers Foundation has built him a mortgage-free smart home in Texas where he lives with his wife and her special needs son.