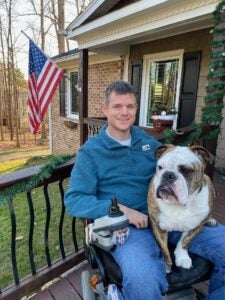 James Howard was born and raised in Lynchburg, Virginia. He comes from a large military family where his father served during Vietnam and grandfather served in World War II, with the 82nd Airborne. Howard followed in their footsteps when he joined the Army in 2002. He achieved the rank of Captain and most of his service was in the 82nd Airborne Division and training for Special Forces.

Howard served in the Army for eight years before he had to medically retire in 2010 due to multiple injuries he received throughout his years of service. Howard’s injuries began in January of 2004 when he sustained a concussion during a firefight in which his patrol was ambushed by ten IEDs and his vehicle was hit by two RPG’s. Only a month later Howard was on foot patrol with one of his team leaders when four IEDs exploded about ten feet from them. The blast threw him and he suffered another concussion, broke his collarbone, damaged his c-level vertebrae and also caught some shrapnel. In February of 2008 Howard was conducting a long distance endurance swim for exercise when he injured his neck further in a diving accident. As a result, Howard is now a C5 quadriplegic with no hand function, no leg function, and paralyzed from the chest down.

Howard currently lives in Richmond, Virginia with his wife Amanda and their son Luke. The biggest joy in his life is spending quality time with his family and friends. Howard enjoys sports and doesn’t let his situation hinder him from doing what he loves. Howard has participated in numerous national games competing in sporting events such as archery, where he draws the bow with his teeth, swimming, cycling, rowing, and wheelchair rugby. He had the privilege to participate in the 2018 Warrior Games with Team SOCOM and even made an appearance on ESPN during his swimming event.

Howard considers his injury a blessing by misfortune which led him to start two all volunteer nonprofits that serve veterans and children with disabilities. VAU Veterans and Athletes United has supported over 6,000 veterans since 2013 through accessible retreats and adaptive sports programs. His other non profit is REACHcycles which has provided over 1,000 specially adapted bikes to children with disabilities.

Captain James Howard wants people to know, “If anyone can learn something from my story I hope they remember to enjoy every day to the fullest. Don’t take life too seriously and make it count.  If you have a disability, focus on the things that it doesn’t prevent you from doing well and don’t dwell on the things that it interferes with. Avoid being disabled in spirit. Helping others that are a lot worse off can sometimes be the best medicine when having a rough day.”