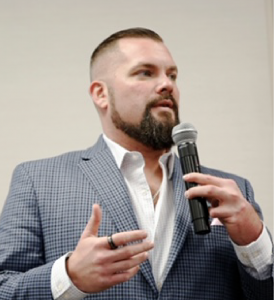 USMC Cpl Jacob Schick is a third-generation Marine who now serves as the Chief Executive Officer for 22KILL a non-profit organization dedicated to raising awareness of the epidemic of the 22 warriors that die by suicide every day.

Cpl Schick was serving in Al-Anbar Iraq in September of 2004 when a triple-stacked tank mine detonated below his vehicle. Jake suffered compound fractures in his left leg and left arm; multiple skin, ligament bone losses; varying burns; partial loss of his left hand and arm; amputation below the knee of his right leg, traumatic brain injury and post-traumatic stress disorder.

He is a staunch advocate for maximizing the potential in people from all walks of life and shares his story and the effects of being severely wounded at public speaking engagements throughout the country.

He has also appeared on James Gandolfini’s HBO special “Alive Day Memories: Home from Iraq,” “60 Minute Sports,” and had acting roles in “American Sniper,” “The Mule,” and “A Star is Born.”

The Tunnel to Towers Foundation is building him and his family a new smart home in the Dallas-Fort Worth area of Texas.