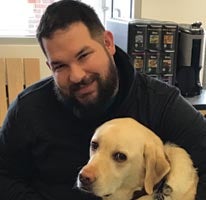 On August 24, 2013, Gavin White was leading a combined Afghan U.S. patrol in Afghanistan looking for improvised explosives devices, when one found him.

Gavin remembers hearing the blast and calling out, “Who’s hit?” Then, he heard someone in his squad reply, “You are, sir.”

Gavin sustained catastrophic injuries and endured 60 surgeries. His right leg was amputated and he lost the use of his left leg. While he recovered at Walter Reed Medical Center, he had a special visitor, then President Barack Obama. This meeting would take on added significance months later at his sister’s graduation from West Point.

During his commencement address to the graduating class, President Barack Obama publicly praised Gavin’s heroism and compared him and his fellow service members to those who stormed the beaches of Normandy.

“Like the soldiers who came before him, Gavin was in a foreign land, helping people he’d never met, putting himself in harm’s way for the sake of his community, his family and the folks back home. Gavin lost one of his legs in an attack. I met him last year at Walter Reed. He was wounded, but just as determined as the day that he arrived here at West Point. He developed a simple goal. Today, his sister Morgan will graduate and, true to his promise, Gavin will be there to stand and exchange salutes with her.”

The president’s words led to a standing ovation, to which a visibly humbled Gavin stood up from his seat, as the entire stadium cheered.

After being released from Walter Reed, Gavin and his wife Karissa, moved into a house in Herndon, Virginia only to realize the home had become an obstacle course. “Problems that I never considered started appearing in my home,” Gavin said. “Not being able to use the kitchen, not being able to do laundry and not being able to get clothes out of my closet to wear for the day. At one point, every time I wanted to use the bathroom, I had to get out of my chair, on to the floor and walk on my hands to get to the toilet. I knew I needed help, and had to ask for it.”

He reached out to the Semper Fi Fund for help, who connected Gavin with the Stephen Siller Tunnel to Towers Foundation.

On April 12, 2018, Gavin and Karissa stood on a stage in front of a crowd of more than 100 people, about to receive a gift that would change their lives. The night before, the Foundation put the finishing touches on a four-month renovation of the home. It was now a “smart home,” with every essential function of the house, from the lights and thermostat to the window coverings and cabinets controlled via tablet.

The kitchen now featured a motorized stove that could be moved to wheelchair height, cabinets with pull down shelves and an accessible dishwasher.

After struggling with the basics of everyday life, this new home gave Gavin back some of his independence. “Having everything within reach, being able to get plates out of cabinets, being able to cook without worrying about spilling something, being able to get into my closet, things you do everyday that you would not think of until you couldn’t do it.”

The Stephen Siller Tunnel to Towers Foundation created its Smart Home Program to give independence back to those who have paid a daunting price for our freedoms.

Tunnel to Towers started building smart homes for catastrophically injured service members in 2010. The first home was built for Army SGT Brendan Marrocco, the first quadruple amputee from America’s wars to survive. His home was built in Stephen Siller’s hometown of Staten Island.

Since then, through the generosity of donors like you, we have been able to deliver, start construction and design a total of 75 smart homes. While we are incredibly proud of all the work we have done, we know there is more work to do. With your continued support, you can help us reach our goal of building a minimum of 200 smart homes for wounded servicemen and women and their families.

The Foundation has become an expert in solving the problem of a service member returning home and not being able to live an independent life because of the injuries they sustained.

Each home features unique technology to give these heroes some of their independence back. Now, Gavin can get clothing out of his closet, cook and access the bathroom independently.

These small things mean everything to him. Gavin’s Tunnel to Towers Foundation smart home changed his life. Your support allows us to give disabled veterans like Gavin a place to call home.

“People need a place where they can feel comfortable, where they can relax and where they can be at ease. For most people, it’s their home,” said Gavin. “Until today, this was just a house where I lived. Now, I feel like it’s my home.”