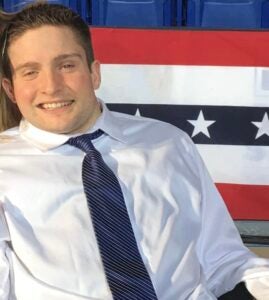 On December 29, 2015 US Secret Service Special Agent Garrett FitzGerald was injured on duty in a head-on car collision when he and three colleagues collided on the highway with an impaired vehicle that crossed the double yellow line. The driver of the other vehicle, who died at the scene, was believed to be under the influence of heroin.  The impact of this collision caused FitzGerald to sustain a spinal cord injury paralyzing him from the chest down.

Since this injury FitzGerald has married and he and his wife have welcomed their daughter into their lives. In addition to this, he has continued his love for fitness through adaptive exercise and participating in runs ranging from 5K’s to marathons using a specialized wheelchair assisted by his colleagues.

FitzGerald looks forward to an accessible smart home where he, his wife and daughter can enjoy spending time together and celebrate milestones throughout the years.

Tunnel to Towers Foundation is building a mortgage-free smart home for Special Agent Garrett FitzGerald and his family.