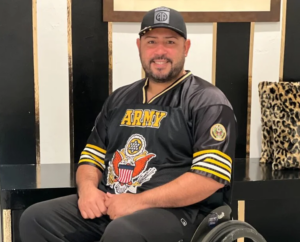 Ezequiel Rodriguez-Guadalupe was born in Fajardo, Puerto Rico and spent his childhood in Rio Grande. For a short time in his childhood, he lived in the Bronx with his family, and eventually moved back to the United States in his adulthood. On a visit to his hometown to participate in a church event was where Ezequiel met his wife, Sol Marian Castro, with whom he will celebrate 20 years of marriage in October 2022. Together, they have three children: Chenoa, Mikaily, and Nahum.

Rodriguez-Guadalupe enlisted in the United States Army on September 25, 2001, just two weeks after the attacks on September 11th. As a child, he had dreams of becoming a pilot and had just begun his second semester of flight school when the World Trade Center was attacked.

Rodriguez-Guadalupe served as a Private First Class in the 1/17 Cavalry Unit within the 82nd Airborne Division. The soldiers of the 82nd Airborne Division are trained to conduct forcible entry parachute assaults, as well as other key military operations. Rodriguez-Guadalupe suffers from Cauda Equina Syndrome, caused by injuries sustained during training, specifically from the impact of jumps he had participated in with existing injuries.

As well as the physical trauma of his disability, he has overcome immense emotional trauma as well with the help of his strong faith and incredible support system. Ezequiel Rodriguez-Guadalupe is a worship leader in his church, and enjoys many hobbies including playing chess, fishing, cooking, and most often, wood-working.

PFC Rodriguez-Guadalupe regards his decision to serve in the military as the most important decision of his life, and one he would make again in a heartbeat.

The Tunnel to Towers Foundation is building a customized smart home for PFC Rodriguez-Guadalupe and his family.