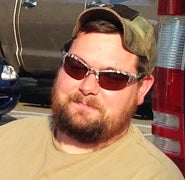 On May 12, 2012, while on his third deployment to Afghanistan, Army Staff Sergeant Eric Myers, a feld artilleryman with the 82nd Airborne Division, was seriously injured when he stepped on an improvised explosive device (IED).

SSG Myers, who had served in the Army for 10 years before being injured, lost both legs above the knee and one finger, and suffered other serious injuries including forearm nerve damage.

A smart home was built for SSG Myers, and his wife and children, in Linden, North Carolina. The home was completed in 2017.