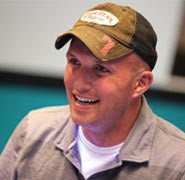 A 2006 graduate of the U.S. Military Academy at West Point, Major Edward “Flip” Klein (Ret) was leading his company on a dismounted patrol in Afghanistan when he was struck by a dismounted improvised explosive device. His injury resulted in the loss of both his legs and right arm, and significant damage to his remaining hand.

When asked about his rehabilitation, Flip said, “My family has been the rock of my recovery and has been incredibly supportive during every phase of my recovery”. Flip’s parents moved to Bethesda for eight months, where Walter Reed National Military Medical Center is located, to help support him during the most demanding phases of his recovery.

Flip enjoys winter sports and keeping active year round by cycling. He recieved a smart home in Issaquah, Washington.