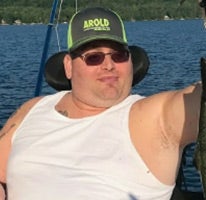 During his third tour to Iraq in April of 2005, USMC Sniper Sgt Eddie Ryan was shot twice when he and his fellow Marines were mistaken for the enemy.

The first bullet left him blind in his left eye and damaged the part of his brain that controls motor skills.

Since his injuries, he has slowly fought to regain movement in his arms and gain core strength to sit up. He continues to work to regain his independence, while being confined to his wheelchair.

Eddie had wanted to be a Marine since he was a kid, wanted to follow in his father’s footsteps, who also served his country in the Marines.

His desire to enlist only intensified after the September 11 attacks.

In June of 2002, he graduated high school and enlisted for a four-year tour. Three months later in September, he left for Iraq. Then served a second tour in Africa and he was on his third tour when he was injured in the friendly fire incident.

The Tunnel to Towers Foundation paid off Eddie’s mortgage and will now be renovating his home in Lake George, New York to make it more accessible.