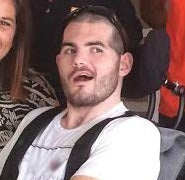 On September 25, 2011, while leading his squad on foot patrol in Afghanistan, Sgt. Doug Vitale stepped on an improvised explosive device (IED), and lost both of his legs above the knee. Due to blood loss, Doug suffered strokes on both sides of his brain. His fellow Marines in the field put their own lives in jeopardy in order to get Doug to safety and back home to his family.

Doug has the support of his parents, siblings, close friends and his loving wife, Alexis. In the summer of 2013, Doug returned to his home community of Pittsburgh after spending time in recovery at the Polytrauma Rehabilitation program for brain injury at the James A. Haley VA Hospital in Florida.