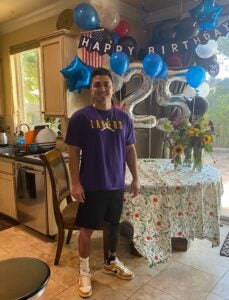 Dez Del Barba was born and raised in Stockton, California. Del Barba had a great childhood; he grew up playing soccer, basketball, lacrosse and watching the Oakland Athletics, and Los Angeles Lakers whenever he had the chance. Del Barba is the product of a military family. His mother was an E-7 in the CAARNG doing Active Duty orders and his father was a Correctional Officer at Deuel Vocational Institute near Tracy, California.

Army Specialist Dez Del Barba enlisted in the United States Army in October of 2018. He took a leave of absence during his last semester at Sonoma State University in order to complete basic training. During the five weeks of basic training, Del Barba contracted streptococcus A, which went untreated and then evolved into necrotizing fasciitis. His condition worsened, resulting in the amputation of his left leg just above the knee, damage to his right leg, damage to his underarms, and Post Traumatic Stress Disorder. Del Barba had to undergo 43 total surgeries, 100 days in the ICU, and spent numerous months working on physical, occupational, and mental health therapy.

Currently, Del Barba lives in Lodi, California with his girlfriend, Julia Ruiz. He spends his time watching the Oakland Athletics, Los Angeles Lakers, weightlifting, and collecting sneakers. He has also started a non-profit organization with his family: Operation Dez Strong. ODS assists amputee children ages 4 to 18 with financial and emotional assistance for their prosthetic limbs.

Dez Del Barba would like to extend his gratitude to his girlfriend, Julia Ruiz, his mother, Kamini, his father, Mark, and his sister, Drisa.