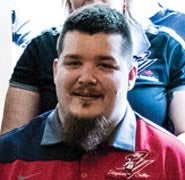 On September 30, 2010, David Bixler was on patrol in a heavily mined farmland in the Arghandab River Valley in Afghanistan. He was leading a team of three Afghan National Army Soldiers, when his unit was ambushed and heavy gunfire ensued.

When David saw that one of the Afghan soldiers had veered toward uncleared ground, he ran after him and pushed him to safety. While doing so, David stepped on an improvised explosive device. He suffered the loss of both legs, damage to his spinal cord, traumatic brain injury, and other serious injuries. For his heroic action, David was awarded the Silver Star.

David Bixler moved into his smart home in Waldorf, Maryland in July of 2016.