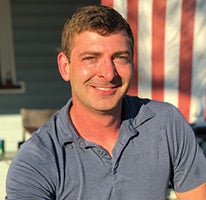 Dan Berschinski grew up near Atlanta, Georgia and went on to graduate from the United States Military Academy at West Point in 2007.

In the summer of 2009, then Lieutenant Berschinski deployed to Afghanistan.

A month into his deployment on August 18th, Dan triggered an improvised explosive device, which instantly severed both of his legs above the knees, broke his jaw, and shattered his left arm.

He became the military’s first above-the-knee and hip-disarticulation amputee to walk on a daily basis.

After medically retiring from the Army, Dan went on to attend and receive his MBA from Stanford University’s Graduate School of Business.

In honor of Veterans Day, Tunnel to Towers announced the mortgage on Captain Berschinski’s Atlanta home had been paid in full on November 11, 2020. The Foundation also unveiled renovations to improve accessibility.