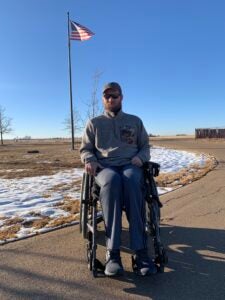 Army SFC Dale Smith served in the Army for 13 years as an infantryman deploying to three times including tours in Iraq and Afghanistan.

He survived the gunshot, but it left him blind, partially deaf, and dealing with a severe traumatic brain injury.

Dale has been married to his wife and high school sweetheart Lindsey for 20 years.

They have three children together.

He is an avid hunter and loves the outdoors. Even after his injury, he has found a way to continue his passion for hunting and fishing.

The Tunnel to Towers Foundation is renovating his Texico, New Mexico home and paying off his mortgage.