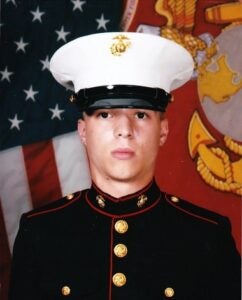 Marine Corporal Colin Pascik enlisted in the Marines out of high school and was deployed to Afghanistan in 2010.

On August 22, 2010, he was leading a patrol in Afghanistan when he was hit by an improvised explosive device.

He lost his legs, his right leg amputated above the knee and the left below the knee.

Since his injury he has completed school to be a guitar technician and aspires to start an off-road team to raise money for other veterans.

He enjoys caring for lizards, snakes and other reptiles, woodworking, playing guitar and shooting.

Tunnel to Towers has built him a smart home in New Jersey.