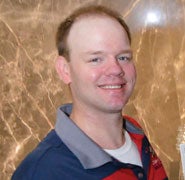 On March 17, 2008, CPL Christopher Levi was severely injured when an improvised exploding device in Iraq hit the armored Humvee he was traveling in. CPL Levi was in the middle vehicle of a five-vehicle convoy.

The blast cut through both of Levi’s legs at mid-thigh, leaving him a bilateral amputee. He also suffered significant damage to his right hand and arm. Prior to his deployment to Iraq, CPL Levi, who was certified as an Army Ranger, served in Afghanistan. CPL Levi spent two and a half years in the hospital.

His perseverance has been remarkable. In addition to passing the Series 7 General Securities Representative Exam and receiving his bachelor’s degree, CPL Levi volunteers and leads groups for The Center for Discovery, a national specialty center for the advanced care and treatment of children and adults with significant disabilities, and is a team leader and participant of World T.E.A.M. Sports’ annual Face of America ride.