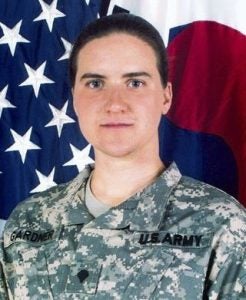 Army SGT Christina Gardner joined the Delayed Entry Program in October 2004 and trained with a local Reserve unit until she graduated from Long Island University in the spring of 2005. She went to Basic Training and AIT at Fort Leonard Wood to become a military police officer. She was stationed at Fort Hood and served in Area One in the Republic of Korea. SGT Gardner was catastrophically injured during peacekeeping operations on June 22, 2006. She lost both legs below the knees, incurred a lumbar spinal cord injury and skull fractures resulting in a traumatic brain injury, and lost two fingers on her left hand.

SGT Gardner has been part of the U.S. Women’s National Sled Hockey Team for nine years, serving as Assistant Captain for the last three years and winning two World Championships with the team. She is the current president of the non-profit Central Maine Adaptive Sports and has expanded its programs to include not only skiing, snowboarding, and snowshoeing, but also track & field, cycling, sled hockey, and kayaking.

The Tunnel to Towers Foundation has built SGT Gardner a customized smart home in Oxford, Maine.