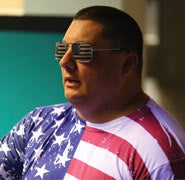 On December 13, 2011, Cpl. Christian Brown stepped on an improvised explosive device in Afghanistan and was severely wounded. He sustained multi-trauma to both hands and arms, the loss of both legs, internal injuries, and wounds to his upper left leg. He was in a coma for about a month.

Just a week earlier, Cpl. Brown and his squad came under insurgent fire, but Brown was able to lead his squad in a counterattack. After one of his squad members was critically wounded, Brown carried the wounded Marine almost 1,000 feet under enemy fire to a helicopter. For this act of bravery, he received the Silver Star Medal, the military’s third highest award for valor.

Christian who received a smart home in Munford, Tennessee, is an avid outdoorsman who enjoys fishing and hunting.