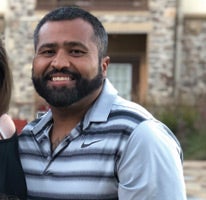 Army Sgt Carlos Figueroa served as an Army combat engineer and defused improvised explosive devices in Iraq. In 2003, his vehicle passed over and triggered an IED.

The blast fractured his ribs and his jaw. Despite his injuries, he decided to remain with his squad. Two months later, his vehicle triggered another IED. As a result, Sgt Figueroa suffered a traumatic brain injury and extensive injuries to his leg. After more than a dozen surgeries and years of debilitating pain, he would eventually lose his leg.

In 2017, his family moved to Texas for medical reasons for his daughter, Lilly, who was born with her legs fused together. Her condition eventually led to the decision to amputate, and she is now a double amputee above the knee.

During a 2018 Veterans Day appearance on ABC’s The View, Tunnel to Towers announced it would be building a brand new, mortgage-free smart home for the Figueroa family.

Sgt Figueroa, his wife Jessica, and their daughters Lilly and Braelynn received their new home on February 12, 2021.