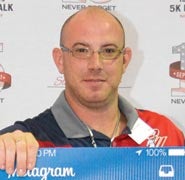 October 1, 2022 Statement on the Passing of Bryan Dilberian

It is with the greatest sadness that we share the tragic news of the passing of our dear friend and smart home recipient, Bryan Dilberian. His service and sacrifice for our country will never be forgotten.

The Siller family and the Tunnel to Towers Foundation have so much love for Bryan, and we will cherish all the times we spent together. Our prayers and support are with his family and the military community. Bryan will always be a part of us, and we will keep him close to our hearts.

On July 1, 2011, following 24 hours of routine patrol, Brooklyn native, SGT Bryan Dilberian was critically wounded in an IED explosion. Bryan’s best friend, PFC Jimmy Waters, was killed instantly. As a result of his extensive injuries, Bryan lost both legs below the knee and his left arm below the elbow. He suffered shrapnel wounds to his face and neck. It was a miracle that he survived.

Not more than 10 days after his initial surgery, Bryan began to fight his way back. He persevered through physical and occupational therapy in order to strengthen his body for everything that was to come. Displaying immense strength, and with the support of his family, Bryan has continued on with his life.

He didn’t second-guess his decision to serve, saying, “I would do it a million times over. There’s nothing to regret about it. I did something for the country and I’m proud of myself.”

Our dear friend and smart home recipient, Bryan Dilberian, passed on October 1, 2022. His service and sacrifice for our country will never be forgotten. Bryan will always be a part of us, and we will keep him close to our hearts.