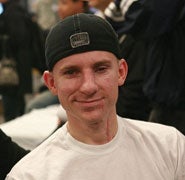 On April 12, 2009, Army Specialist Brendan Marrocco was at the wheel of a Mine Resistant Ambush Protected (MRAP) vehicle when it sustained a direct hit from an Explosive Formed Projectile (EFP). The armor-piercing projectile punched through the middle of the driver’s side door.

The blast left Marrocco a quadruple-amputee, the first service member to survive after losing all four limbs in combat in Iraq. Among his other injuries were a severed carotid artery, burns to his neck and face, broken bones, and severe lacerations.

Brendan was the first smart home recipient of the Stephen Siller Tunnel to Towers Foundation. He received his home on Staten Island, NY in June of 2011.

In December of 2012, Brendan underwent 13 hours of miraculous double arm transplant surgery. The surgery connected the bones, blood vessels, muscles, tendons, nerves, and skin on both arms, extending his left arm from the elbow and his right from below the shoulder.