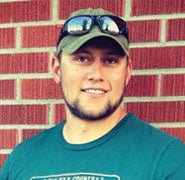 Bo Reichenbach, a SO2 Navy Seal, was injured on July 17, 2012 in Afghanistan. While on foot patrol, Bo stepped on an IED and was critically injured, losing both of his legs above the knee. He also suffered significant damage to his right forearm.

Bo received continuous support from his family, including his wife, Lacy, and son, Landon, along with all of his SEAL buddies and the new friends he made at Walter Reed during his stay.

Bo and family moved into their smart home in Billings, Montana in October of 2015.