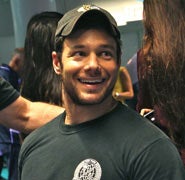 On May 15, 2012, Ben Harrow stepped on an improvised explosive device while leading an anti-terrorism mission in Afghanistan. He lost both of his legs above the knee, two fingers and sustained injuries to his right forearm.

Ben is a decorated leader in the Army for the Green Berets. He graduated from West Point, where he received the Unsung Hero award his senior year. During his time in the US Army, he has earned the rank of Captain.

In 2008, Ben married his hometown sweetheart Gina and are now proud parents of a son and daughter. Ben has relied primarily on Gina to help motivate him to continue rehabilitation. The smart home he received is going a long way in helping Ben overcome his injury while taking care of his family.