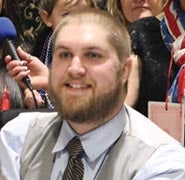 On November 19, 2011, Army Staff Sergeant Ben Eberle and his unit, the 3rd Infantry Brigade Combat Team, 1st Armored Division, were conducting route clearance patrol in Afghanistan when SSG Eberle dismounted and stepped on an IED. The explosion resulted in Ben losing both legs above the knee, and his right hand. He also suffered a severe right shoulder injury.

The medical expertise of a Special Forces’ soldier from the Czech Republic saved Ben’s life.

Ben, who is married and has two children, received a smart home in Alpena, Michigan on June 14, 2016.

Having this specially adapted home is having a tremendous impact on SSG Eberle’s ability to be the all-around family man that he is, and is providing a far less stressful life for him and his family.