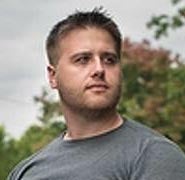 Army Sergeant Adam Hartswick, a senior combat medic from Pine Grove Mills, Pennsylvania, was severely injured on May 14, 2013 when he stepped on an improvised explosive device in Afghanistan’s Kandahar Province.

SGT Hartswick lost both legs above the knee, his right index finger, and part of his right thumb. He also suffered a right hip fracture, a mild traumatic brain injury, and bilateral perforated eardrums.

Since retiring from the Army, SGT Hartswick has found a new calling – as an instructor, teaching a tactical combat casualty care course for first responders.