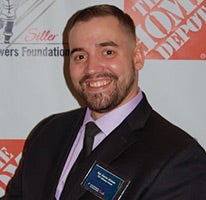 USMC Sgt. Aaron Alonso grew up in Jefferson Township, New Jersey, and joined the Marines in large part because of the 9/11 attacks.

Alonso was critically injured after stepping on an improvised explosive device while on patrol in Afghanistan on February 8, 2014.

Due to injuries sustained in the blast – he lost both legs.

He loves the outdoors, hunting, fishing, and riding his ATV.

He is looking forward to receiving his smart home and spending more time with his daughter.

Tunnel to Towers has built him a new smart home in New Jersey.