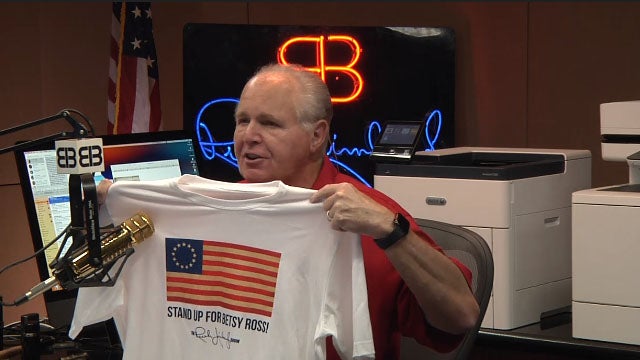 UPDATE 7/29: Rush Limbaugh announced this morning the portion of the proceeds benefiting Tunnel to Towers has now reached $3 million.

“I am overwhelmed by this incredible donation. I’d like to send my thanks to Rush and Kathryn for this incredible gift, which we will use to change the lives of America’s true heroes – first responders, veterans, and their families,” said Tunnel to Towers CEO and Chairman Frank Siller upon hearing the news.

The donation comes from the record-breaking sales of the official Rush Limbaugh Show “Stand Up For Betsy Ross!” t-shirt.

The shirt launched on July 8th in response to Nike’s decision to pull shoes that featured the iconic 13-star flag.

“I’ve been looking forward all night to telling you this,” he told the hosts, in just 11 days of sales – more than 100,000 of the shirts were sold, and the orders continue to roll in. Rush added, “It’s a true testament to the goodness and decency of the American people in our audiences. It’s so far beyond our expectations.”

You can support the Tunnel to Towers Foundation and order the “Stand Up For Betsy Ross!” t-shirt at RushLimbaughshowstore.com