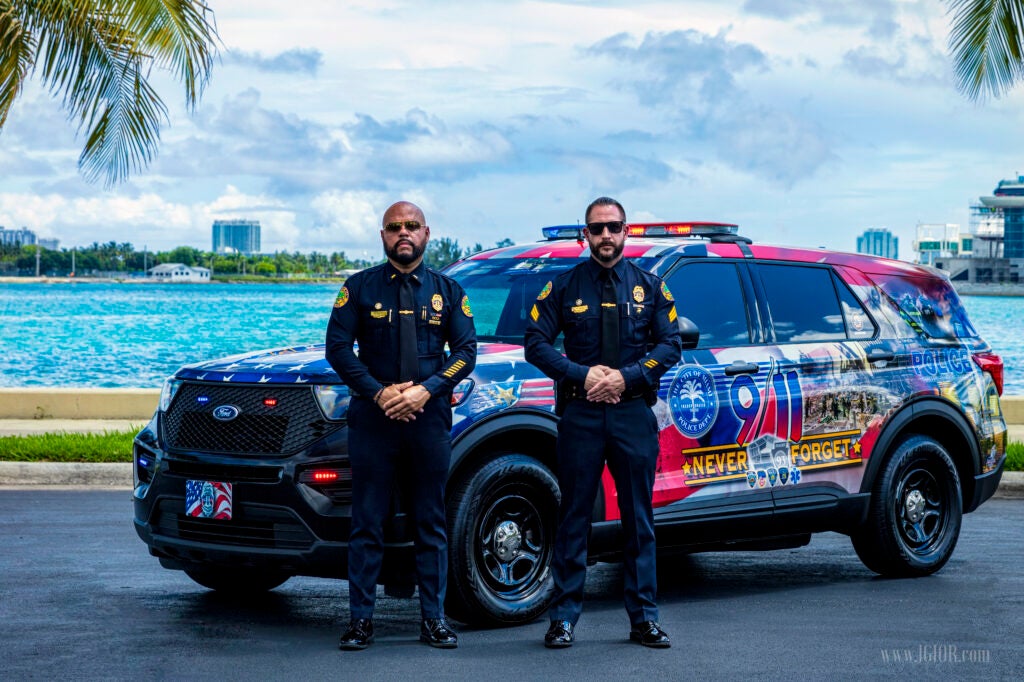 On September 1, the City of Miami Police Department (MPD) unveiled a specially designed 9/11 memorial car wrap done to commemorate the 20th anniversary of the attacks on 911. A specially designed memorial badge was also created and sold with all proceeds going to the Tunnel to Towers Foundation. 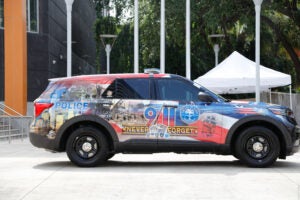 The special MPD 9/11 memorial badge was manufactured by Smith & Warren, a badge and insignia manufacturing company that services law enforcement and public service agencies across the United States, and as well the U.S. military. Approximately $3,000 was raised from the sale of these 9/11 badges and all proceeds were donated to the Tunnel to Towers Foundation. Tunnel to Towers board member and retired FDNY Battalion Commander Jack Oehm was present for the unveiling, along with MPD dignitaries and local elected officials from the city of Miami. 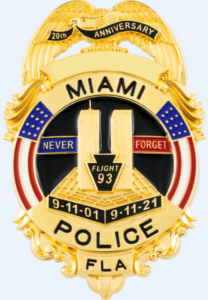 Officers of the City of Miami Police Department, Lieutenant Roberto Valdes and Sergeant Matthew Vasquez, created the 9/11 Remembrance car wrap for the 20th anniversary of the attacks on September 11, 2001.

Officers of the City of Miami Police Department, Lieutenant Roberto Valdes and Sergeant Matthew Vasquez, created a 9/11 Remembrance car wrap for the 20th anniversary of the attacks on September 11, 2001. The car wrap was sponsored by the Community-Police Relations Foundation (CPR Foundation) – the foundation also matched the $3,000 raised from the sale of the MPD 9/11 memorial badge. The CPR Foundation is a charity that was founded by philanthropist Al Eskanazy, a native New Yorker, to repair the strained relationship between law enforcement agencies across the United States and the communities that they serve. 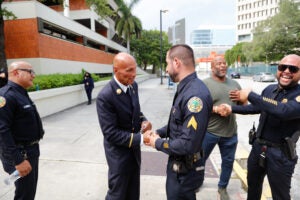 Al Eskanazy, a native New Yorker and a self described patriotic American, felt that it was his patriotic duty to sponsor the car wrap to honor the 2,977 souls that perished on September 11, 2001 following the terrorist attacks that day. The goal of the CPR Foundation is to humanize the badge that law enforcement officers wear and strengthen the relationship between officers and their communities in order to bridge the gap between them. This project was spearheaded by Lt. Roberto Valdes, a 23-year veteran of the MPD, who partnered with the Community-Police Relations Foundation to create a unique and highly detailed car wrap, and a customized 9/11 Memorial Miami PD badge was specially created and sold by Lt. Valdes and Sgt. Vasquez. The car wrap is meant to engage the community of the city of Miami, and it brings the community and police together.

Miami PD Sgt. Matthew Vasquez, a Brooklyn native and a U.S. Marine corps veteran, previously designed an armed forces car wrap similar to honor America’s veterans. An armed forces badge was sold and the proceeds were donated to the Wounded Warrior Project. The badge and the car wrap was a symbol to remember the service and the sacrifice of the service members in the armed forces, as well the sacrifices made by the Gold Star families who are left behind. The car wrap also served to remember the sacrifices of our military service members who have sacrificed life and limb for our country, as well as the military service members who enlisted in our military ranks to fight the War on Terror after the attacks on 9/11. The inception for the idea of a 9/11 memorial car wrap and a memorial badge was inspired by the armed forces car wrap done by Sgt. Vasquez. 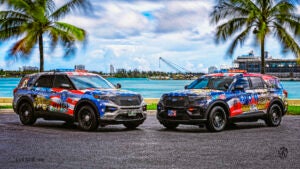 The purpose of the MPD’s 9/11 Memorial car wrap is to engage the communities that they serve, as they keep their promise to never forgetting the 2,077 people that perished during the terrorist attacks on September 11, 2001.