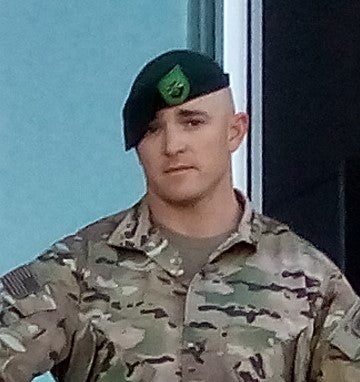 In 2014, he joined the ranks of the elite special forces green berets and deployed to Afghanistan again, this time with 2nd Battalion, 10th Group, in September of 2017.

He lost his life after coming under hostile fire a month and a half later on November 4, 2017.

The 33-year-old left behind his wife Shelly and two children, Connor and Wyatt.

The Tunnel to Towers Foundation is committed to paying off the mortgage on the family’s home in Colorado Springs, Colorado.

Shelly is working on her bachelor’s degree and hopes to found her own nonprofit.  Upon hearing the Tunnel to Towers Foundation would pay off her mortgage – she vowed to pay it forward.

“This gift will be passed on as we see others in need, and we are able to make a difference in their lives as well. We will honor this gift and treat it well,” Shelly said.