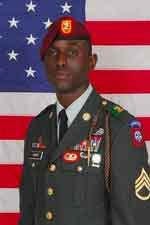 Staff Sgt Ronnie L. Sanders was on his third tour of duty in Iraq when he died from wounds sustained when a bomb detonated near his vehicle in Taji, Iraq on February 3, 2007. He was a platoon sergeant with Company A, 407th Brigade Support Battalion, 2nd Brigade Combat Team, 82nd Airborne Division at Fort Bragg. He was 26 years old.

Sanders was from  Shreveport, Louisiana, graduated from Woodlawn High School in 1999 and joined the Army soon after. To those who knew him, he was a model paratrooper and leader. He was revered and trusted by his soldiers and made sure they were always equipped, trained, and ready for anything. His awards include the Bronze Star, Purple Heart, and several other medals for his devoted service.

He is survived by his four children, Lakeiya Sanders, Ronnie Sanders Jr, and twin daughters, Ra’Onnie and Re’Onnie Sanders, with his wife, Rachel Sanders, who lives in Fayetteville, North Carolina. Shortly after his death, Rachel wrote in a statement: “My husband was looking forward to completing the mission, to return and continue to raise his beautiful children  that meant everything to him.”