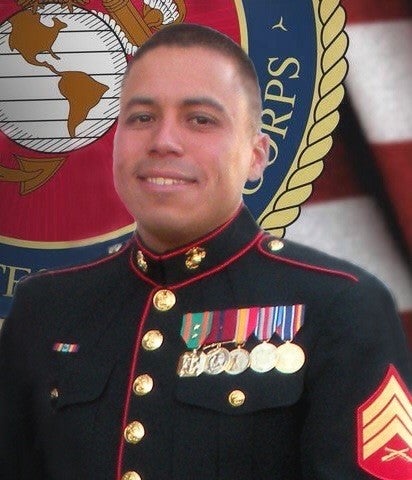 Joey was a loving, selfless, humble person with a contagious smile and big heart. When America was attacked by terrorists on September 11, 2001, Joey wanted to do something to honor all the individuals who lost their lives or were injured during the attacks. Joey paid tribute by enlisting in the Marine Corps to serve his country in an effort to defend our freedom.

Sergeant Saenz proudly served his country for 7 years with two overseas deployments. Early in his career, Sgt. Saenz was stationed in Okianwa, Japan with 9th Engineer Support Battalion and at Camp Johnson, NC with Headquarters and Service Company, Marine Corps Combat Service Support Schools (H&S Company, MCCSSS).  In 2007, Sgt. Saenz, Christy Heritage-Saenz (his wife), and his son moved from North Carolina to Camp Pendelton, CA where he was assigned to 1st Battalion, 11th Marines Regiment. In May 2008, Sgt. Saenz served his first deployment in support of the 15th Marine Expeditionary Unit (MEU). Sgt. Saenz second deployment was in May 2010 with India Battery 3/12 in Afghanistan in support of Operation Enduring Freedom. During this deployment, Sgt. Saenz volunteered to serve as a provisional Infantry Squad Leader despite his qualification as a Critical Skills Operator, which would have enabled him to remain “inside the wire” while maintaining the unit’s motor vehicle assets. Serving as the first American unit in the Kajaki District in Helmand Province, Afghanistan, Sgt. Saenz and his squad conducted daily offensive operations in enemy territory.  In the early morning, of August 09, 2010, Sgt. Saenz struck an IED which tragically ended his life.

In honor of Sgt Saenz, a firebase in Helmand Province, Afghanistan was named “Firebase Saenz” and a Marine Corps M777 Lightweight Howitzer Cannon was renamed “Saenz From Above”.  On April 6, 2011, the 82nd Legislature in Texas paid tribute to the life of USMC Sgt. Saenz III by passing the House of Concurrent Resolution H.C.R. No. 128.  Sgt. Saenz memory lives on in the many Marines who were inspired by his selfless leadership, his commitment to the Corps, and his example as an exemplary father, husband, and Marine.