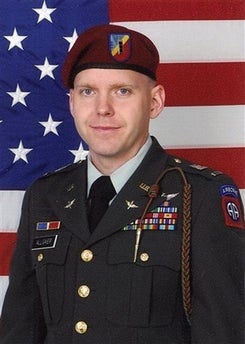 Chief Warrant Officer 3 Christopher Allgaier, of the 3rd General Support Aviation Battalion, 82nd Brigade Combat Team, 82nd Airborne Division, Fort Bragg, North Carolina, lost his life on May 30, 2007, when the CH-47 Chinook Helicopter he was piloting was shot down by insurgents and crashed in Afghanistan. Four other service members were killed in the crash.

CW3 Allgaier was just 33 years old at the time of his death. He left behind his wife, Jennifer, and their daughters Natalie, Gina, and Joanna.

The Tunnel to Towers Foundation will pay off the mortgage held on the family’s home in Fayetteville, North Carolina.