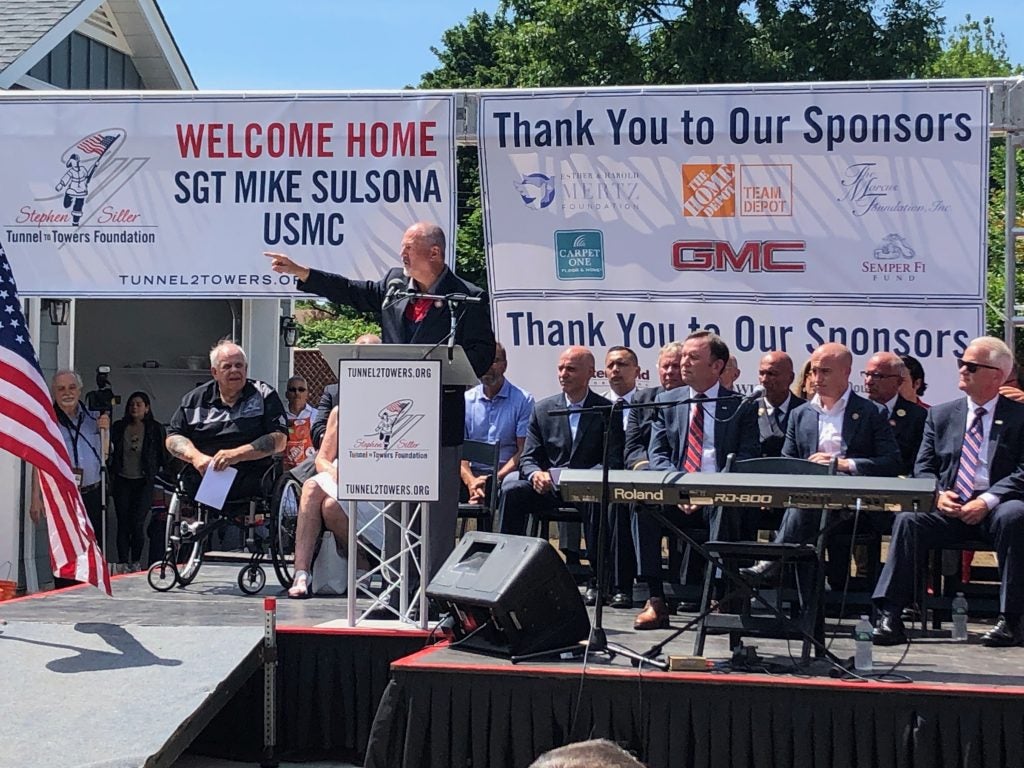 Tuesday, just a few days before Independence day, USMC Sergeant Michael Sulsona was escorted down a flag-lined street to his new, mortgage-free home, greeted by the applause of friends, neighbors, veterans and soliders.

The 67-year-old Vietnam Veteran is the newest recipient of a custom designed smart home from the Tunnel to Towers Foundation.

For Sgt Sulsona, it has been a long journey to get to this new home, starting in Brooklyn when he was just 17 years old. Sulsona decided to enlist. He jokes, “I went to the post office and the Marine Corps was the only one that was open,” so he became a Marine.

A year later, he was on his way to Vietnam. With a smile he says, “at that time I didn’t even know what a ‘Vietnam’ was.”

He was nearing the end of his first year when his life changed forever. While on patrol, he stepped on a landmine. He survived, but both of his legs had to be amputated due to the extent of his injuries.

He was flown home to be treated at the Naval Hospital in Philadelphia. His wife, Frida, then just sixteen, took the bus to visit him. After he was released from the hospital, he turned his attention to academia, eventually graduating from the prestigious Goddard College with an MFA in Creative Writing.

He worked punching up scripts, ghost writing books and produced dozens of plays and other works. His contributions led to Kennedy Center Honors for his play “Who We Are/How We Loved.”

He found his voice as a storyteller and found he could make people listen to what he had to say. Now, he has focused on helping his fellow veterans – working with both the Stephen Siller Tunnel to Towers Foundation and the Marine Corps League.

Sgt Sulsona’s new smart home is packed with technology that can make his day to day life easier and allow him to do things more independently. It is only fitting that he will receive his home on the eve of America’s Independence Day.

“I could not think of a more fitting or patriotic way to kick off Independence Day week than what we are doing here today. Like my brother Stephen, Mike put his life on the line to save others. He sacrificed so much so that we can live a free and blessed life,” said Frank Siller, CEO of the Tunnel to Towers Foundation.

While the home is filled with functionality that will help Sgt Sulsona, he is most looking forward to his brand new office – a space where he can continue to help others.

He plans on continuing his fight for his fellow veterans from his home office, a space that will give their cases the personal care and attention that they deserve.