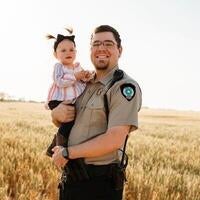 Concho County Sheriff’s Office Deputy Sheriff Samuel Leonard was shot and killed while responding to a complaint in Eden, Texas. He was just 26 years of age at the time of his death. Sergeant Stephen Jones was also killed in the incident.

An altercation occurred as both deputies made contact with a subject at a residence. The subject fatally shot both deputies and critically wounded a city employee before being taken into custody.

Deputy Sheriff Leonard served with the Concho County Sheriff’s Office for six months, having spent one and a half years as a deputy/officer.

Deputy Sheriff Leonard is survived by his wife, Morgan, and their daughter.

The Tunnel to Towers Foundation has paid off the mortgage held on the Leonard family’s home.