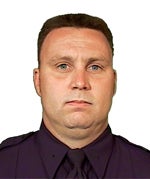 Following the attack, Sergeant Ryan worked 70 to 80 hours a week at Ground Zero for several months.

He is survived by his wife, and his four children.