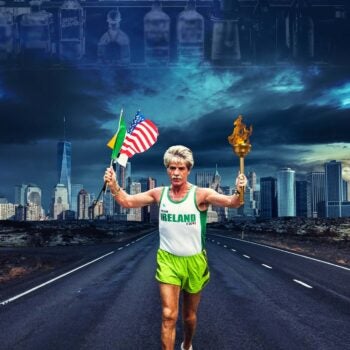 Tom McGrath, dubbed the “Irish Forrest Gump ”, “Running Man ” and “The Black Sheep ” is a 71-year-old Irishman born in Ederney, County Fermanagh, Northern Ireland who will be running 100 miles starting November 4th; he will run a full marathon each day on on November 4th, 5th, and 6th, at the Jacqueline Kennedy Onassis Reservoir in Central Park, then ending his 100-mile venture at the finish line of the 2021 TCS New York City Marathon on Sunday, November 7th, 2021. Tom is running on behalf of the Tunnel to Towers Foundation— the preeminent 9/11 charity organization that was founded to honor the sacrifice of Fire Department of New York City (FDNY) Firefighter Stephen Siller, who gave his life while saving others on 9/11. He is the team captain for Tunnel to Towers’ team in the marathon. Tom is excited about raising money for the Tunnel to Towers Foundation’s In the Line of Duty Program, which provides mortgage-free homes to our nation’s catastrophically injured veterans and first responders, and also to the families with young children of fallen first responders and fallen military service members. Beginning November 4th, 2021 Tom will begin a 100 mile journey that will end at the marathon’s finish line. Tom is an “ultra-runner”, and he has run over 200,000 miles to raise money for charities.

Tom’s first introduction to the Tunnel to Towers Foundation was when he saw a Tunnel to Towers PSA that featured one of our veteran smart-home recipients; he was so moved by what the Tunnel to Towers Foundation had provided for this wounded veteran who had sacrificed his limbs for this country, Tom felt compelled to run on behalf of the Foundation and do whatever he could to bring awareness to our cause. In the PSA, the wounded veteran and smart-home recipient said that “the hardest thing he ever had to do was to call his kids to pick him up off of the bathroom floor.” This message resonated with Tom, and it hit home with him and reminded him of his own personal struggles. More than once, Tom had also called his wife and his daughter to pick him up off of the bathroom floor, but for a very different reason— alcoholism. Tom had struggled with alcoholism a few years ago, and had nearly died while battling his addiction; he decided to make change, reignited his passion for running, and vowed to never pick up a drink again.

A film adaptation of Tom McGrath’s memoir about his battle with alcoholism, Saved by My Feet, will be released on October 15th, 2021 and will be available on Google Play and iTunes. The film details his journey to recovery of “tragedy to triumph, salvation to redemption— with willpower, discipline and determination.” The trailer for Tom’s film can be viewed here: https://vimeo.com/450043176 , and the password to view it is: ” TrailerFinal “.

Tom is honored to run on behalf of the Tunnel to Towers Foundation during this milestone 20th anniversary year and raise money for our programs that benefit catastrophically wounded veterans, first responders, and Gold Star and Fallen First Responder families with young children; He has decided to use his running abilities to raise money for charities that ensure the protection of children like the Tunnel to Towers Foundation.