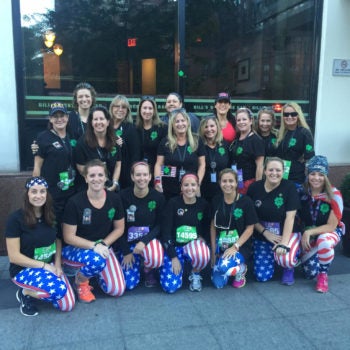 For Stephanie Tipping, each year the Tunnel to Towers Run & Walk represents a time to honor her brother, a time to recharge, and a time to reconnect with the people and values she holds dear. After Stephanie’s brother, FDNY firefighter John Tipping, sacrificed his life on September 11, 2001, she had a longing to honor his heroic efforts. Stephanie found a place to remember his life and his sacrifice when she came to her first Tunnel to Towers Run.

Stephanie’s annual pilgrimage to Ground Zero and the T2T Run started when she and a friend made their way into Manhattan for the first Tunnel to Towers Run. At the time, her children were babies. Stephanie’s husband wanted to provide her with an opportunity to bear witness to her brother’s selflessness, so he took charge of the little ones and the rest is history.

Now, Stephanie’s Team FF John Tipping is a lively mixture of family, friends, and co-workers. In all, about 25 people make their way each year to not only participate in the memorial run, but to honor and celebrate great lives.

The team arrives on a bus that they charter, with each participant donning a custom-designed Team Tipping shirt. Over the years they have raised thousands of dollars (despite having no previous fundraising experience). “My brother made a choice to do what was right, and now I can do the right thing too,” Stephanie said. “It is my thank you to my brother for making the right decision. The Run gives me an opportunity to be part of something bigger than myself and to give back.”

Stephanie believes that the entire experience has been transformative for many members of her team. One of her team members, a police officer, finally joined in after years of resistance. Like many, he was dealing with anger and bitterness over many things that he had experienced as an NYPD officer. The T2T Run reenergized him. He was blown away by the experience. He has let go of that immense negativity and pain, and now focuses on all of the positives he has in his life.

Another of Stephanie’s friends struggled with claustrophobia. The thought of going through the tunnel was too much to bear. Overcoming this fear epitomizes the power of the human spirit. And then there’s a friend who had never ran a day in her life, but drew inspiration from the T2T experience, and has been running ever since.

Last year Stephanie had brain surgery and was not physically capable of running from the foot of the tunnel to the finish line, but she participated in the weekend nonetheless. She didn’t want to miss it. “I come away from the weekend feeling better about myself and the world,” Stephanie said. “This Run gives the world a place to celebrate goodness and good people like my brother. And, we are better for it.”