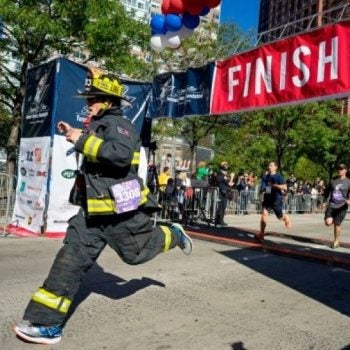 Like many firefighters who participate in Tunnel to Towers Run & Walk events, Robert Sutherland, a member of the East Farmingdale Volunteer Fire Department on Long Island, retraces Stephen Siller’s steps by wearing his turnout gear from start to finish.

On September 24, 2017, for the third consecutive year, Sutherland will be honoring the memory of two men, Kevin Smith and Welles Crowther, who paid the ultimate price on 9/11. In addition, he will now pay homage to Bob Newman, an FDNY firefighter who succumbed to 9/11-related lung cancer in February of this year.

Smith, a 23-year veteran of the FDNY and a charter member of its Hazardous Materials Company 1 (HAZMAT), was one of the 343 FDNY members who perished after responding to the September 11, 2001 attacks on the World Trade Center. Smith also served as a volunteer with the East Farmingdale FD with Sutherland’s father.

Crowthers, an equities trader at Sandler O’Neill and Partners, LP, was a volunteer member of the Empire Hook and Ladder Company, No.1, in Upper Nyack, NY. Crowthers organized a rescue effort on the floors high above where the official rescue workers were able to ascend. In one instance, he carried a woman down to the 61st floor, before returning to the 78th floor to rescue others. Crowthers, affectionately known as the man in the red bandanna, is believed to have saved a dozen people.

Newman served the country in Vietnam before becoming an FDNY firefighter. He spent over 40 years in the department. Newman was one of the many firefighters running into the towers on September 11. He worked at Ground Zero doing the rescue and recovery period for weeks and served the department for another four years prior to retiring.

“Bob Newman was my neighbor since I was a very young boy,” Sutherland said. “Bob always regaled me with tales of his days in the department, saying how it was the greatest job in the world. He was hoping that I would get into the department as well. I will remember him as I take each step in the race.”

Sutherland’s fundraising approach entails reaching out to 150 coworkers via email and posting on social media. Following up is also a key step in fundraising. Sutherland thanks all donors and provides updates as to where he is relative to his goal. He also shows his appreciation by sending personal thank you cards after the event with photos, his run time, and the final fundraising tally.

“Don’t be afraid to share posts or send emails,” Sutherland said. “There are a lot of people who were touched by that day, and want to do what they can to help. I don’t just ask for donations, but ask for people to run with me as well. The Foundation does amazing things with the funds raised and is very active in the emergency services community, which I appreciate as a volunteer firefighter.”