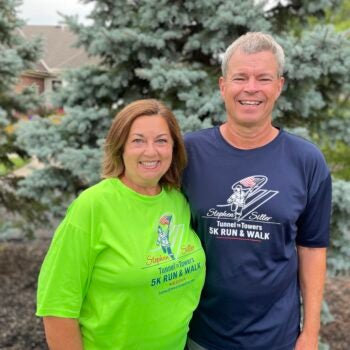 Randy and Bernice Payne are avid volunteers with the Tunnel to Towers Foundation, having been involved with the Foundation since its inception at the very first Tunnel to Towers 5K Run & Walk NYC in 2002. Since then, Tunnel to Towers has become the preeminent 9/11 charity organization that was founded to honor the sacrifice of New York City Fire Department (FDNY) Firefighter Stephen Siller, who gave his life while saving others on 9/11. The 5K Run & Walk NYC retraces Stephen Siller’s final footsteps from the foot of the then Brooklyn-Battery Tunnel to the Twin Towers and pays homage to the 343 FDNY Firefighters, and 71 Law Enforcement Officers. This was when the couple first met a few of Stephen Siller’s siblings—Tunnel to Towers CEO and Chairman Frank Siller, George Siller, and Janis Siller-Hannan; it was also around this time that Randy and Bernice met Tom the English Firefighter from London who has been to every 5K Run & Walk since.

That day back in 2002 left a huge impact on both Bernice and Randy, prompting Randy to send an email to George Siller where he promised that he and his wife would be back and they’d do more than just the run. When Randy first started out fundraising years ago it was by sharing Stephen’s story through word of mouth with his friends and associates; in that first year, he managed to raise $975— a big deal to him back then. Randy and wife Bernice have come a long way from the initial $950 raised for Tunnel to Towers, and more recently they have managed to raise $200,000 in one year for the Foundation.

In 2012, Randy learned that the Tunnel to Towers Foundation was building a custom smart-home in eastern Ohio for retired U.S. Marine Corps Corporal Kyle Hockeberry who was catastrophically wounded in Afghanistan in 2011 when he was only 19 years old. Randy contacted Kyle’s mother Kathy by email to tell her that he was going to help build her son’s home. Randy organized a satellite run in Cincinnati, OH and enlisted the help of many of his coworkers and associates. Randy’s employer, Kroger, was instrumental in his plan to take his level of fundraising for Kyle Hockenberry’s home to the next level; Kroger gave Randy permission to solicit funds for donations from the company’s supplier community. Kroger’s supplier network’s generosity in their donations allowed Randy to host the run at almost zero cost, and nearly every dollar raised went directly into building smart-homes. Randy’s fundraising partnerships with Kroger’s supplier network continues through to today even as he has changed roles within the company.

Randy and Bernice have grown to become a part of the extended Siller family, and the Tunnel to Towers Foundation has become a major part of their lives. After all these years of their involvement in supporting the Foundation’s mission to do good, Randy has become an honorary “Siller”. Over the last few years, Randy and Bernice’s children became involved in their fundraising and their entire family became dedicated to helping Tunnel to Towers fulfill their mission in supporting America’s heroes and the families that they leave behind. Randy and Bernice have also had the privilege of watching Stephen and Sally’s children grow up just like their own. Bernice Payne often says that “the Siller Family and the Tunnel to Towers Foundation are the most wonderful people we wish we had never met.” To this day Randy keeps a photo of Stephen in his home office, and he promises to never forget Stephen and the other 2,976 people that perished on September 11, 2021 after the terrorist attacks on that day.