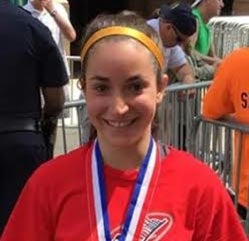 Many of those who raise funds for the Tunnel to Towers Foundation do so in honor of a lost loved one or to pay homage a member of the NYPD or FDNY who died on September 11, 2001. In Nicole DeFilippi’s case, it’s not about memorializing an individual, but to commemorate all who lost their lives; those who were at work, first responders who attempted to save others, and for all those families, some of which she knows, who lost loved ones and have never been able to have complete closure.
DeFilippi has a number of relatives and friends whose mothers, fathers, cousins, etc. were police officers and first responders that day. One of the main reasons for her involvement is to raise funds for them – both living and deceased first responders. She feels it’s the least she could do to recognize what these men and women did on 9/11.
Like others, DeFilippi was drawn to the NYC Tunnel to Towers Run & Walk after watching the event on television. “Every year my mother and I would watch the broadcast of the event on TV,” Defilippi said. “We were filled with emotions seeing all those complete the run. I just started researching the foundation and felt a connection to it. A few weeks later, the tower climb registration was released and I signed up instantly. I knew this was a foundation I wanted to be involved with, even in the smallest way.”

DeFilippi, who founded the group Team Ramily in 2015 when she participated in the inaugural tower climb at One World Trade Center, raises money by soliciting donations through phone calls and emails, and by sharing her CrowdRise account on various social media platforms.

Her advice to anyone looking to get involved is pretty straight forward. “Just jump right in,” DeFilippi said. “Share your page on Facebook, Instagram, etc. and express what the organization means to you. People are more inclined to donate when they can relate to you or understand the passion you have for an organization. I think it’s also important to share what T2T does now in its continued work to aid and assist first responders and veterans.”