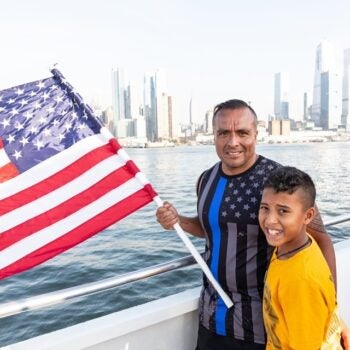 Michael Bobadilla is a Captain with the New Brunswick Police Department in New Jersey, and he will be running in the 2021 TCS New York City Marathon on Sunday, November 7th, 2021 on behalf of the Tunnel to Towers Foundation— the preeminent 9/11 charity organization that was founded from the tragedy of that day to honor the sacrifice of Fire Department of New York City (FDNY) Firefighter Stephen Siller, who gave his life while saving others on 9/11.

Michael has been a member of the New Brunswick PD for over 20 years, and he is the founder of the Michael Bobadilla Soccer Camp that he runs every summer for local youths. In 2001, Michael was a rookie Detective in the Narcotics Unit, and when the terrorist attacks on September 11th, 2001 happened he was in a training class with other officers from the Jersey City Police Department. That same day when he got home, Michael watched the reports on his TV on what had happened— America had been attacked. Michael knew that he needed to jump into action to help and on the evening of September 11th, 2001 he headed down to Ground Zero with a group of law enforcement officers to help in the rescue and relief effort. They turned out of the Richmond County Bank Ballpark stadium, and from there all Michael could see for miles ahead of him was a thick blanket of smoke hanging in the air.

Michael and the other officers and first responders from New York and New Jersey waited in silence at the Staten Island Ferry Terminal, waiting to board and be swallowed in the darkness ahead. Michael vividly remembers the looks of shock on the faces of the first responders who were coming in from Manhattan, and the scenes at Ground Zero were written all over their faces. “These men and women were traumatized by what they had witnessed”, said Michael, “I could tell that they had been through hell, and I was scared for what I would encounter ahead.” As they boarded the ferry and headed towards what was a bustling metropolis just 24 hours earlier, they were met with an uneasy silence.“The world had stopped— there were abandoned food carts and cars melted down to the frame. It was very eerie,” said Michael. He and the other first responders in his group immediately headed towards the bucket brigade, and this was where first responders from all agencies began searching through the detritus. They passed down saws, rope, blades, fire extinguishers and more up and down the line until someone at the end yelled for a stretcher. A survivor buried underneath the rubble was pulled out of the debris virtually unscathed. “It was a miracle”, said Michael, “cops and firemen were crying because of what we had just seen.” They worked all night through into the morning, and before his group headed back to New Jersey Michael sat alone on a sidewalk stunned at the scenes he had witnessed.

Every year since the first anniversary of the September 11 attacks, Michael runs 3 miles with an American flag to commemorate the 2,977 lives lost on America’s Darkest Day. He has also run 12 miles for the 9/11 Promise organization, which is a run of remembrance that honors the lives lost on 9/11, and also provides relief to help the children of those who have sacrificed for our communities and country. Michael is dedicated to honoring the sacrifices of all of the people who were killed on 9/11, as well as the people who are suffering from illnesses directly caused by their participation in the relief effort that lasted for months. Michael is honored to run on behalf of the Tunnel to Towers Foundation during this milestone 20th anniversary year and raise money for our programs that benefit catastrophically wounded veterans, first responders, and Gold Star and Fallen First Responder families with young children.