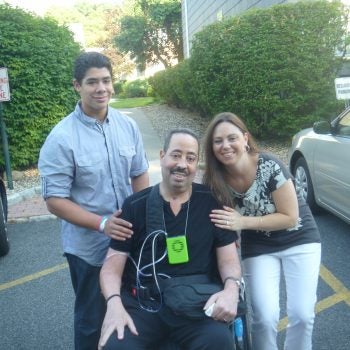 Like many T2T supporters, Jacqueline Lopez raises funds to pay homage to a loved one; in her case, the memory of her husband Luis Lopez. Luis was an NYPD Lieutenant who, in 2012, was diagnosed with a terminal lung disease that was contracted through his work at Ground Zero. In June of 2015, after three years of confinement to a wheel chair and having to use supplemental oxygen, Luis succumbed to the disease. He spent nearly 15 months in the hospital during his last three years of life. Luis Lopez served NYC as a police officer for 27 years.
Jacqueline refers to her late husband as her hero. “He was my warrior,” Jacqueline said. “I began fundraising because it was a way for me to keep Luis’ legacy alive. He was a man who came from nothing and believed in helping others. I also wanted to keep 9/11 actively in the thoughts and minds of people and keep them informed that 9/11 not only affected thousands on that day but there are thousands of people sick and suffering today because of their work at Ground Zero.”
Before running in the annual Tunnel to Towers Run & Walk (2017 was her second year fundraising for T2T), Jacqueline participated in the 9/11 Memorial Museum 5K for three years, raising over $5,000. However, she now feels that Tunnel to Towers is the right foundation for her, citing T2T’s generosity with families who have lost a loved one in the line of duty, as well as its support of injured service members needing custom homes.
Jacqueline uses common methods to raise funds. She uses Facebook to share her fundraising page, and utilizes her NYPD network of friends and supporters to spread the word though emails and posters. She typically includes photos of Luis so others can see the devastating effects of his 9/11 illness in hope that they can form a connection with her story. Each time a donation is made, Jacqueline sends a personal thank you via email.
She also carries out her fundraising initiatives for Scott Vasel of Park Ridge, N.J. On September 10, 2001, Scott started a job at the World Trade Center as a disaster recovery specialist with Marsh & McLennan. He lost his life on just his second day with the company, leaving behind a wife and two young children.
Like most other fundraisers, Jacqueline believes in word of mouth. “If you’re looking to begin fundraising, make your story known to others,” she said. “Help them understand what the Tunnel to Towers organization is all about and how much it does for first responders and veterans around the country.”