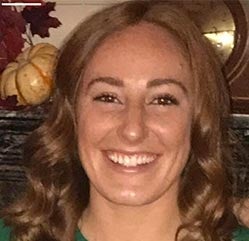 Dana DiSanto, along with her parents, has been either volunteering her time and talent, or participating in the NYC Tunnel to Towers Run & Walk since the inaugural event in 2002, but didn’t begin her fundraising efforts until 2016 when she participated in the Foundation’s Tower Climb at One World Trade Center.
In a very short period of time, she has done a tremendous job in bringing in donations. In fact, come September 24, 2017, the date of the 16th Annual T2T Run & Walk, DiSanto hopes to have raised $10,000!
Social media is the secret to her success. “I post a lot!” DiSanto said. “I basically use every social media platform, and tell everyone I meet about it. In the beginning I was a little shy. But, I realized that once people saw how much it meant to me, they were willing to donate each time I asked.”
While the family recognizes all of those who lost their lives or where affected by the tragic events of September 11, 2001, it pays special homage to FDNY Lieutenant Paul Mitchell, who was one of the 343 members of the FDNY who to lose his life while saving others. Lieutenant Mitchell was a dear friend of DiSanto’s father.