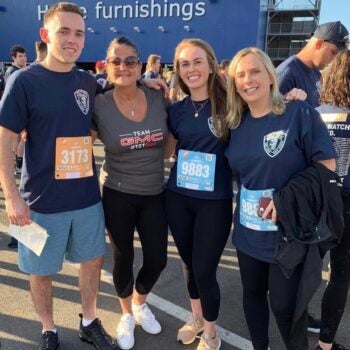 Caitlyn McIntyre, pictured second from the right, is a volunteer with the Tunnel to Towers Young Professional Network— a network dedicated to connecting younger generations to the mission of the Foundation through events, fundraising, and professional mentoring to ensure that generations to come Never Forget the attacks on September 11, 2001. Caitlyn’s father was Port Authority of New York and New Jersey Police Department (PAPD) Police Officer Donald James McIntyre who perished on September 11th, 2001 when he and 36 other members of the PAPD rushed to Ground Zero to save countless lives that day. Caitlyn also lost her uncle, John Sherry, who was a broker in the World Trade Center.

Caitlyn is a registered nurse (RN) in a Manhattan Pediatric Cardiac Intensive Care Unit. Caitlyn’s first introduction to the Foundation was at the 2019 Tunnel to Towers Tower Climb New York City, and this was where she learned of the Young Professionals Network. Each year since 2015, the Tunnel to Towers has held the Tunnel to Towers Tower Climb NYC at One World Observatory at One World Trade Center, where over 1,000 participants climb 104 stories, symbolizing strength, hope, and the resiliency of the American spirit; this event commemorates the lives and sacrifice of all of our heroic first responders who made the ultimate sacrifice on September 11th, 2001, including New York City Fire Department Firefighter Stephen Siller and Captain Billy Burke. The Tower Climb was an exhilarating experience for Caitlyn, and it was a hallmark volunteer event with the Young Professionals Network. While completing the Tower Climb, she was in awe of the wounded U.S. Veterans of all military branches who were racing past her on the climb; Caitlyn was inspired by the tenacity of the wounded Veterans who succeeded in getting to the top of the Tower Climb ahead of her. She was overcome with emotion when she reached the top. Her experience as a surviving line of duty child came full circle when she completed the climb that her father made 20 years ago when he ran into the collapsed buildings on September 11th, 2021.

Caitlyn has answered a medical call to serve her community similar to how her father, PAPD Police Officer Donald James McIntyre, answered the call to serve and protect travelers from New York and New Jersey who travel by land, sea, air, and rail. Caitlyn knew that she wanted to give back not only professionally through her work as an RN, but also as a dedicated volunteer to the Tunnel to Towers Foundation; she wanted to help surviving families of first responders like her own, whose fathers, mothers, husbands, and wives laid down their lives in the of duty to help citizens to safety. Caitlyn is eternally grateful to the Tunnel to Towers Foundation for establishing the COVID-19 Heroes Fund that supplied frontline workers with essential PPE supplies, hot meals, and financial relief to the families with young children of frontline workers who passed from COVID-19.

In September of 2019, Caitlyn participated in the annual Tunnel to Towers 5K Run & Walk NYC that is held each year on the last Sunday in September; the 5K Run & Walk NYC retraces Stephen Siller’s final footsteps from the foot of the then Brooklyn-Battery Tunnel to the Twin Towers and pays homage to the 343 FDNY Firefighters, 71 Law Enforcement Officers, and thousands of civilians who lost their lives on September 11th, 2001. Caitlyn had never run in the Foundation’s 5K event before, and she had an overwhelmingly emotional experience as a first-time runner. When she crossed the finish line past the Brooklyn-Battery Tunnel, another Tunnel to Towers volunteer stood holding a flag with a picture of her father, Police Officer Donald James McIntyre. It was an incredibly bittersweet, unexpected, and monumental moment for her to see her dad’s face as she crossed the finish line while running in his memory.

This year, Caitlyn is especially looking forward to running again in the Tunnel to Towers 5K Run & Walk NYC, and she is excited to participate in future events like the Tunnel to Towers Young Professionals Network “Spinning for Our Soldiers” SoulCycle that took place in Tribeca on June 23rd, 2021.