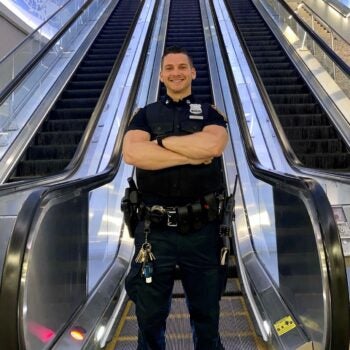 Anthony Camerada is a Police Officer with the New York Metropolitan Transportation Authority Police Department (MTAPD), and he will be running in the 2021 TCS New York City Marathon for the first time on Sunday, November 7th, 2021. Anthony is running on behalf of the Tunnel to Towers Foundation— the preeminent 9/11 charity organization that was founded to honor the sacrifice of Fire Department of New York City (FDNY) Firefighter Stephen Siller, who gave his life while saving others on 9/11.This will be Anthony’s first marathon ever, and he is excited about raising money for the Tunnel to Towers Foundation In the Line of Duty Program, which provides mortgage-free homes to our nation’s catastrophically injured veterans and first responders, and also to the families with young children of fallen first responders and fallen military service members.

Anthony’s first introduction to the Tunnel to Towers Foundation was in 2012 following the aftermath of Hurricane Sandy, the most destructive hurricane to affect New York City, including Staten Island, NY, where the headquarters for the Foundation is located. The Foundation’s staff went knocking door-to-door in Anthony’s neighborhood seeking to help community residents who were deeply affected by the storm’s devastation. The Tunnel to Towers Foundation helped Anthony’s family repair the damages sustained to their home.

Anthony was only 15-years-old at the time, but the compassion and benevolence displayed by the Foundation staff in helping his family and other community members in need stuck with Anthony. It was then that Anthony began to learn about the Tunnel to Towers Foundation and the heroic legacy left behind by FDNY Firefighter Stephen Siller. The attacks on September 11th, 2001 had a tremendous impact on Anthony, and he knew that becoming a first responder was his true destiny. The valor displayed by Firefighter Siller inspired Anthony. Service has always been important to the Camerada family and is intrinsic to their core family values; Anthony has two older brothers in the New York City Police Department (NYPD), and his grandfather was a U.S. Army veteran and a retired Detective from the Kearny Police Department in New Jersey. Stephen Siller inspired Anthony to dedicate his life to being a first responder, and he believes that this career path is his true calling; he strives to be a positive role model to those in the law enforcement community and their supporters, just like Firefighter Stephen Siller was, and still is, a role model for him.

Anthony is honored to run on behalf of the Tunnel to Towers Foundation during this milestone 20th anniversary year and raise money for our programs that benefit catastrophically wounded veterans, first responders, and Gold Star and Fallen First Responder families with young children. He is happy to help the Foundation that assisted his family directly, and that does so much for the military and first responder communities.

Anthony plans to stay involved with the Tunnel to Towers Foundation and is most looking forward to participating in the Tunnel to Towers Tower Climb NYC that is held in the One World Observatory at One World Trade Center. The Tower Climb NYC has over 1,000 participants annually, who climb 104 stories, symbolizing strength, hope, and the resiliency of the American spirit; this event commemorates the lives and sacrifices of all of our heroic first responders who made the ultimate sacrifice on September 11th, 2001, including FDNY Firefighter Stephen Siller and Captain Billy Burke.