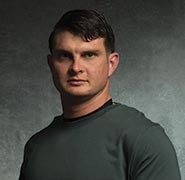 Timothy Brown joined the Marine Corps in 2003 and deployed to both Iraq and Afghanistan. In 2008, SSgt Brown became an Explosive Ordnance Disposal Technician (EOD Tech) and after two years he deployed to Afghanistan again, this time as a member of 1st EOD Company.

On February 3, 2011, while responding to an improvised explosive device (IED), SSgt Brown triggered a secondary IED. As a result of the explosion, he lost both his legs above the knee, his right arm above the elbow, damage to his left hand, and other extensive injuries. Despite a challenging recovery, Tim strives to be a mentor to other catastrophically injured heroes.

Tim began hand cycling as part of rehabilitation. Now his passion, he rides daily and competes across the country. He even completed Race Across America as part of an eight-man team.

When asked about how a smart home will impact his life, Tim replied, “the home will provide a stable place to live for the first time in a decade, and allow me to focus my energies more on accomplishing my goals with cycling and photography, and less on how I am going to get things done throughout the day.”